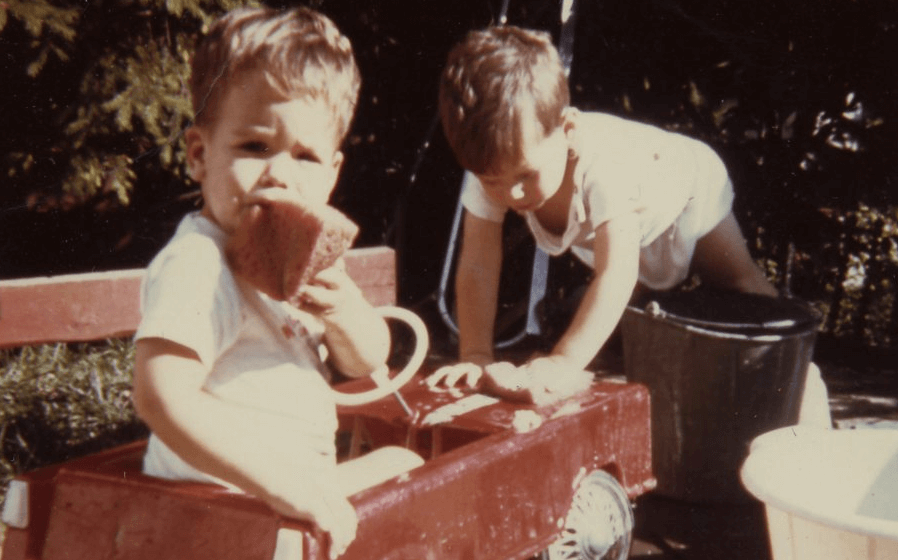 I am an oldest child and was a peaceful baby who slept when I wasn’t eating. This left my mother unprepared for my future self or for my brother who left her sleepless.

My first experiments were in physics. They began at the age of a year and a half, learning to build potential energy by climbing the refrigerator. At two, I slipped away from my nap to play with gravity and friction on the slide two blocks away. The neighbours were very surprised to see me.

At four, my naptime experiments focussed on gravity and pendulums with a rope and the willow tree beside our house. I knew little of vectors, so I simply shortened the rope after each impact with the ground. My eventual success in avoiding the ground led to a sudden and unpleasant feeling around my middle which led me to abandon that exploration.

My mother’s experiment in child management using a hook latch on my bedroom door was defeated when I discovered that a table knife inserted in the frame and lifted, would release both the latch and the misunderstood scientist.

In our new house in Cobden, I tested wind resistance with a cape and an umbrella from the top of Mrs. Burgess’ garage. (The umbrella worked ok, the cape was useless.) I learned about vectors, trajectories and parabolas by throwing crabapples off the third story tower of our house and into the street below. That was pretty awesome, but my mother was not very pleased to hear about it from an annoyed driver.

In the winter, I was able to test the energy absorbing qualities of snow by jumping off a 7 foot cliff in our yard into a drift below, nearly burying myself.

As much as I was learning in the world, I confess that I had little patience for the school system. I played hooky in grade 1. School was not a success for me. However, springtime in the schoolyard had a new research opportunity: the possibilities of a muddy field with a slope and meltwater were truly astounding. Mud dams and dikes filled a couple of weeks each spring.

That summer, in Muskrat Lake under the tutelage of my mad aunt Sybil, I learned to swim and kayak. Having spent years pretending to swim in shallow water, my aunt used the traditional instruction technique of pushing me off the dock and shouting encouragement. Learning kayaking was less dramatic, but even more liberating. I discovered for myself all three of Newton’s laws of motion.

At 8½, I moved to Ottawa. In this new, more urban environment, I was able to begin a limited career in urban exploration and parkour via the nearby ravine and also the rooftops, corridors and garages of the apartment buildings my friends and I lived in.

My problem solving skills in the physical world were pretty well developed by now, but my independent and exploratory nature didn’t meet with the approval of my peers. There was the usual trouble about this: taunting, shoving, and the occasional bloody nose.

I dabbled in playground psychology and sociology. I wish I could report to you some clear learning from these experiments, but I was unable to achieve a personally satisfactory outcome. One particular misunderstanding led to the principal accusing me of being part of an extortion racket with my brother.

I couldn’t figure out how to comply with the demands of my peers any better than I had with my teachers. However, my growing desire to fit in did curtail my explorations somewhat.

You have likely formed an opinion about my youthful explorations in science and it likely has nothing to do with the science I learned. You might be thinking what terrible, uncaring parents I had (I assure you nothing could be further from the truth), or maybe how sad it is that kids today have so little unsupervised time to explore and discover.

Much has been written and said in recent years about how sheltered children have become and how that is limiting their ability to act independently and make choices. As a Cub and Scout leader I have been continually amazed at the fear many children have of bugs, dirt, knives, matches and water. Did they learn to fear them themselves? They never had the chance. We have made them fearful.

We don’t just do it to our kids, we also do it to ourselves. I allow fear to constrain me. Sometimes the fear is justified and learned through experience. More often it is simply fear of judgement that we internalized from the tongues of our parents and our peers. Judgement can be something we confront to improve our skills and thinking, but more often we let it stop us from trying the new.

I have built a stockpile of desires, interests and hopes. I’m pretty sure we all have.

Be supportive. Be critical. Be honest.

One thought on “a child in science”