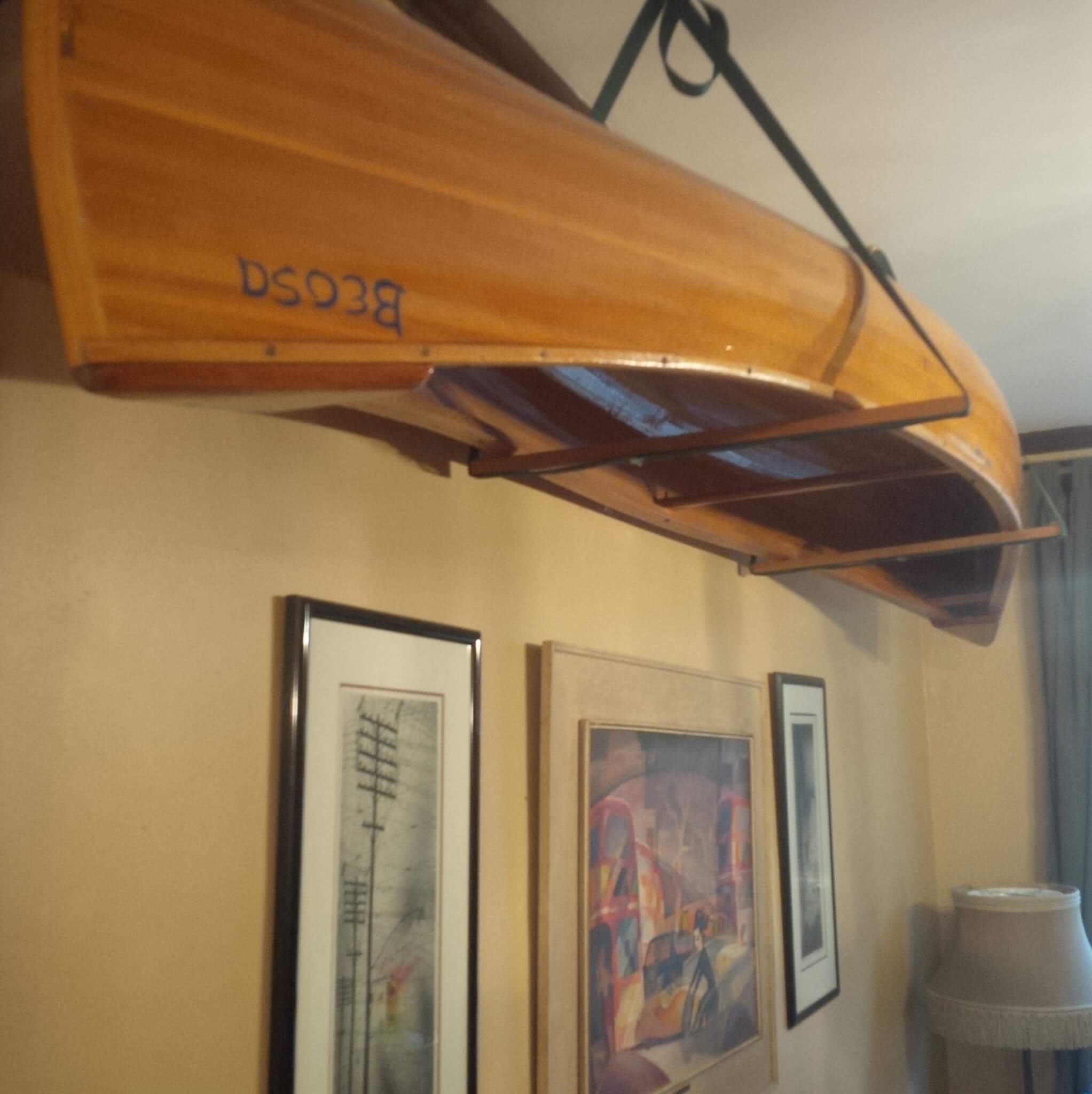 There is an ornament in my living room that visitors to our house notice right away. It rather dominates the room.

My daughter’s first canoe hangs over the couch.

I built that canoe for her in August and September of 2003. It is 10′ long and modelled on a very popular 15′ canoe by the world famous Chesnut Canoe Campany called the Ranger. I called it a Junior Ranger. For months I had searched the Internet and asked friends about a canoe that might be suitable for my daughter. I found nothing. Five years earlier, I had built a Chestnut Ranger for myself with Peter Gould and Kim Pressnail through a Toronto School Board course. I have found it to be a versatile boat and it seemed like a great fit for a kid if only the size could be reduced.

I scaled down the plans I had. I was afraid that the reduced size would seriously alter the performance characteristics and possibly make it unusable. However, eyeballing the finished lines, it looked like it would be ok. I packed up the tools I needed from the house and moved to the cottage near Kinmount for the two weeks I intended to spend building it.

My initial two week estimate for the build was rather optimistic. It took me five weeks.

I was distracted by my surroundings, including the wonderful Minden Wild Water preserve where I would paddle every few days. That was my favourite problem.

I was distracted by my family coming up to see me. I liked that problem too. It was such a good problem having my wife and kids up with me that we missed the big blackout. It never hit our area. The grid around Kinmount was too old to be affected.

My biggest problem was that I had to build and equip my shop as I went. The family cottage I was using as a base is 30 minutes from Bobcaygeon, and an hour from Peterborough. A missing tool or supply meant at least a half day loss for every run into town. And, of course, I couldn’t quite figure out all those needs at once. Or I would try to make do without something only to discover that I really couldn’t.

Too often in my life I have jumped into a task unprepared. Sometimes, there is no choice. If we research and train for every eventuality, we will never do anything. Sometimes though, it is just careless. This was not my first canoe. If I had spent a little more time at the beginning thinking through the steps and writing out a plan, I could have saved days of delay on the project. In the end, though, I finished it. I can see countless things that could be better, but it is fit for its purpose, and it is beautiful.

Morgan loves that canoe. When I gave it to her at the end of the summer, she named it Beosa. That was the name of an Orca whale at the Vancouver Aquarium that she had visited with us and her grandparents on visits to the left coast. Morgan was convinced as only an eight-year-old can be, that she had a special relationship with that whale. Beosa the canoe took my daughter on many adventures with our family. She paddled it at Bluffer’s Park, Cherry Beach, Minden, Kinmount, Wolf and Crab Lakes.

Morgan’s younger brother Liam paddled it for a few years on Lake Ontario and the Gull River as well, but he grew faster than his sister and never got as much use out of it.

It is an heirloom now. It’s waiting for a young family member or friend to take it on the water and make it live again.